News….from the Heart of Grand Bahama… 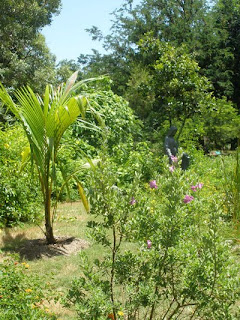 Grand Bahama Island - This week two noteworthy events took place at the Garden of the Groves.   The first was at the Labyrinth where we were able to plant a beautiful young Coconut Tree with a special story:
This tree (pictured) was raised by Marina Gottlieb Sarles from a seed taken from her late Mother’s garden in Abaco.   Marina’s mother, Owanta Gottlieb von Sanden was a zoologist, who loved gardens and all creation.   She was, like her dear husband, ‘Doc’, a great ‘healer’ of creatures great and small, much loved and respected by hundreds of Bahamians. They first came to the Bahamas at the invitation of Wallace Groves who needed a good Logging-Camp Doctor.

Doc Gottlieb and Owanta later moved to Abaco where they lived very happily among their hundreds of friends and patients. Owanta herself was a ‘healer’ whose energy will enhance our Healing Garden in the form of the beautiful Coconut Tree now happily installed near the Madonna and Reflection Pool.

The second special event of the week also involves our dear Friends of the Garden and Illuminators of the Labyrinth, the Family Sarles!
A year ago Jamie Sarles came to the Garden of the Groves with a cardboard box lined with a soft cloth cosseting a baby Raccoon which had been abandoned by its Mother and rescued by Jamie.   Not being familiar with the rearing of these little furry animals he brought it to Erika Gates, mother of all defenseless creatures, who immediately welcomed this new arrival and started giving it liquid food from an eye dropper, and lots of T.L.C.
In a very short time the baby was attracting admirers; among them were a couple who insisted on ‘adopting’ this little creature. 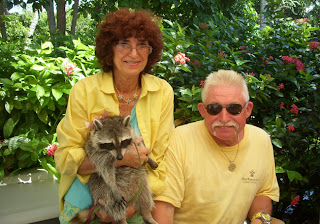 His new ‘parents’, Linda and Kurt Sawall named him ‘Bandit’ and loved him as a child of their own.   He has responded to their care and affection and returned their love.   He happily wears adornments and very proudly accompanies Kurt and Linda for Sunday lunch at the Garden Café where, this week we had the pleasure of sharing his 1st Birthday Celebration!