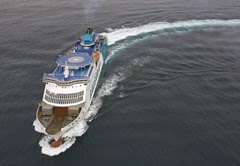 by Kendea Smith, Ministry of Tourism

Freeport, Bahamas - In an effort to continue ongoing recovery in the nation’s second city, the government this week announced that two new ships will be heading to Grand Bahama’s cruise port come 2015.

During a special press conference at Grand Lucayan, Prime Minister Perry Christie announced that the Bahamas Celebration, which was destroyed by an accident on October 31, will be replaced with the Grand Celebration.

“The new “Grand Celebration” replacement ship comes with 50 percent more capacity and projects some 280,000 year round passengers with not less than 100,000 electing to purchase a two or more night stay in GBI combination with the cruise boosting room nights sold from just under 50,000 versus full year 2014 to 125,000 minimum 2015,” he said.

The ownership has also committed to create new job opportunities for not less than 300 Bahamians in the first phase of their operations and ultimately hopes Bahamians can qualify for 100 per cent of the 632 jobs on this Grand Bahama based ship serving the island exclusively from the Port of Palm Beach.

Meanwhile, the Balearia – a $100 million new vessel – will arrive in Grand Bahama this weekend. Built in Spain four years ago, it is one of the newer of the vessels in the company’s fleet. The super-fast cruise ferry sails up to 23 knots in speed. Amenities include a full breakfast buffet restaurant, casino, a la cart restaurant, bars, entertainment for children, spa and a tropical pool bar on the upper deck. The ship has a capacity for 1,000 passengers and 200 containers.

As a result of the new vessel, 30 new direct jobs in the Bahamas and 150 indirect jobs will be created.
“The company is further solidifying its relationship and partnership with Grand Bahama Island by moving all call center sales from the US to Grand Bahama Island, supporting this MOT initiative. The call center presently employs 30 Grand Bahamians who are qualified to respond to queries about the Islands of The Bahamas as well as book air, now sea packages,” Prime Minister Christie said.

“CEO Hernan Calvo thanks the Bahamas Government for the endless help and support that his company has received. He further states that any new ventures would not have been possible without the permanent support of the Ministry of Tourism.

“The goal has always been to allow visitors a “Grand Experience” on Grand Bahama Island. It is clearly evident by the increase in investment; additional hotel rooms, new gateways from the US and Canada offering direct airlift and sealift, we are creating the perfect storm to guarantee “The Grand Life” to everyone visiting and living on Grand Bahama Island.

“This comes as a result of the wonderful work of the prime minister, the minister of tourism, the director general, the promotional board and so many others,” he said.

“Our goal is to bring more 100,000 people to stay on the island and we very much appreciate the partnerships.”
Chief Executive Officer of Balaeria Bahamas Herno Caho also expressed his gratitude.

“Our new vessel is right here in Grand Bahama. It’s a brand new vessel and it is one of the most modern vessels. It has the capacity for 1,000 and a $100 million investment,” he said.

The new vessel will have new pools, a new casino and a spa.

“We are improving our services and we are really glad to be here to bring a newer and bigger vessel. We hope to give life to the island and also all our passengers will come off and stay in Grand Bahama,” Mr. Caho said.

The Balaeria will also have a package feature that will begin in January 2015.
Posted by James Sarles at 6:06 PM 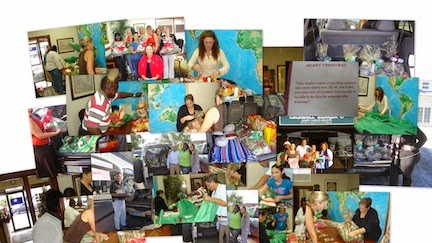 As many of you know our company Coldwell Banker James Sarles Realty has been coordinating our own personal Basket Brigade for the last 7 years and we are asking for your help once again.

The Basket Brigade is built on a simple notion: "One small act of generosity on the part of one caring person can transform the lives of hundreds. It takes only one light to dispel the darkness, and even just one basket or a few, to bring hope!"

Each year, a few days before Christmas, our entire  Coldwell Banker James Sarles Realty staff assembles food baskets and gift cards from Sawyers supermarket for  familes on Grand Bahama Island who can't afford anything special for Christmas.  We find the most needy people on Grand Bahama through a variety of sources and acting as delivery people we anonymously deliver throughout Grand Bahama Island with a simple note that says:

If you feel called to help our program please stop in the office or mail us a check to:
James Sarles Realty
"Basket Brigade"
#9 Regent Center East
Freeport, Bahama
P.O. F-43152

Thanks in advance for your help and support, – James