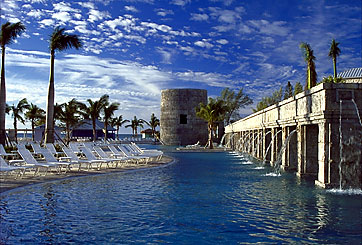 Grand Bahama to Get "Memories" Five-Star All Inclusive Resort

In a matter of weeks, construction work to renovate the Lucayan Reef Village into the Memories Grand Bahama Beach and Casino Resort is expected to begin now that an agreement has been reached between Sunwing Travel and Hutchison Whampoa, Prime Minister Perry Christie said Monday.

Government has partnered with Hutchison, owner of the Lucayan Resort property and Sunwing, the world's largest tour and travel company out of Canada and Blue Diamonds Hotels and Resorts to revive the island's struggling economy with the five star all-inclusive 460 suite resort. A letter of intent was signed back in November. A memorandum of understanding has since been signed, according to Prime Minister Christie.

"It is anticipated that the construction and refurbishment will be completed for the opening of the Blue Diamond Resort later this year," the prime minister announced in Parliament yesterday. The initiative is expected to create 300 construction jobs and 1,000 permanent jobs at the resort once it is complete.

Sunwing, which owns and operates a fleet of 737-800 airplanes, will operate several flights per week from Canada to Freeport, bringing with it additional airlift will be brought to the island. "These added flights and Sunwing tour packages will be beneficial to all participating Grand Bahama hotels and not only Sunwing's, Blue Diamond Reef Resort," he noted.

The beach front property is set to undergo a multi-million dollar transformation, inclusive of a modern sports bar, five unique dining experiences, a teen's club, kids club with a themed aqua park, golf and a casino, according to a Blue Diamond release.

"It is anticipated that the construction and refurbishment will be completed for the opening of the Blue Diamond Resort later this year," Christie said on Monday.

Tourism Minister Obie Wilchcombe told The Freeport News following the Prime Minister's announcement that the whole idea behind the partnership is to get Grand Bahama back to the point where there is sustained growth.

"So we expect refurbishment to begin almost immediately and we will move toward ensuring that the Reef reopens and the employment of 1,000 jobs," he said. "We're working diligently because Grand Bahama is a prioritized area and we believe that we're going to see a magnificent turn around in Grand Bahama.

"There has to be a good brand associated with this project and we have to ensure that there is a marketing in the place." Wilchcombe also pointed out that the renovation of the project is only the first stage as staff will need to be hired and training carried out.

"Don't forget that's a brand, and that brand has certain specifics that they demand–and you're talking pretty much brand new employees who will be coming to work at the Reef together with employees who are currently with the Grand Lucayan, so you have to figure out how this is going to work," he said.

"The Grand Lucayan will not be affected by the Reef; the Reef will become a different entity and new employees are going to be brought in, so you're going to be talking about training, you've got to put all of the pieces in place."

Wilchcombe said government also has a role to play to ensure that undertaking is a success. "While all of this is taking place, we're going to be working on the marketing and getting airlift and everything in place," he said.

A date for the reopening of the resort has not yet been released. Memories Grand Bahama Beach and Casino will be leased and operated by Blue Diamond Hotels and Resorts which owns nine hotels totaling 5,025 rooms inclusive of six in the Caribbean.

In addition to its Bahamas resort, the conglomerate would have added three more this year alone with the opening of Memories White Sands in Jamaica and Memories Punta Cana in the Dominican Republic.

James Sarles Speaks to Business Leaders from 27 Countries: 10 Great Reasons to Invest In Real Estate in The Bahamas 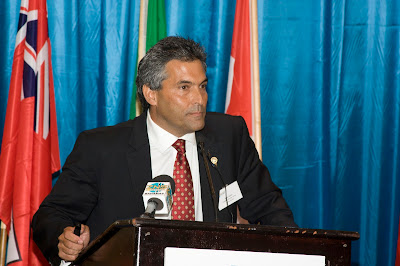 • The Bahamas’ welcoming philosophy and no-red-tape approach toward international investors
• The many tax-free advantages of no income tax, no personal tax, no sales tax, and in Grand Bahama: no property tax
• Legal residency opportunities associated with becoming an investor of $500,000 or more in The Bahamas
• The country’s longtime stable democracy
• The wide variety of available and affordable real estate right now
•  Financing opportunities and resources available in The Bahamas
• The key geographical location and close proximity to the United States
• The warm, welcoming people of The Bahamas
•  Unprecedented opportunities for investing in single family homes, condominiums, and commercial real estate
• The deep quality of life and natural abundance that the clear Bahamian waters and commitment to sustaining them holds.

Other executives at the conference spoke about the potential for development of maritime and logistics industries, opportunities in banking and financial services, tourism, business services, energy, agriculture, manufacturing, and the knowledge economy.

Business leaders from 27 countries were also reminded of what a natural and state-of-the-art gateway The Bahamas offers to the Eastern Seaboard of North, South, and Central America, and to the Caribbean.

James Sarles’ leadership in The Bahamas real estate market, and experience in both global connections and the local community brought a unique personal vision and insight into the potential opportunities for investment in The Bahamas. His presentation on the panel with Minister of Tourism Obediah Wilchombe underscored The Bahamas’ ideal platform for a wide variety of domestic and international businesses—and an unmatched location for second home ownership.
Posted by James Sarles at 5:30 PM

Joining Forces to Introduce The Bahamas to The Hamptons

Behold: The Islands of The Bahamas

Behold: The Islands of The Bahamas
This new campaign (launched during last night's Super Bowl 2013) showcases the naturally exquisite turquoise waters, stunning beaches, friendly people, and relaxed lifestyle that compels both vacationers, warm-winter visitors,  and residents alike—including many celebrities associated with The Bahamas (who are featured in the spot)—to celebrate the glories of this diverse nation and its striking beauty.

If you are looking to find your own home in this paradise of 700 islands and cays, we'd love to help. 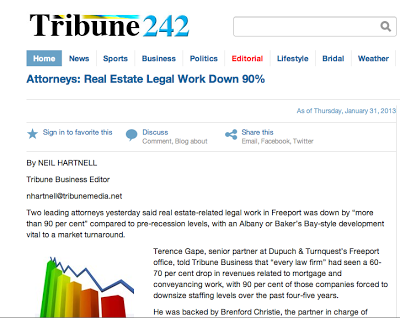