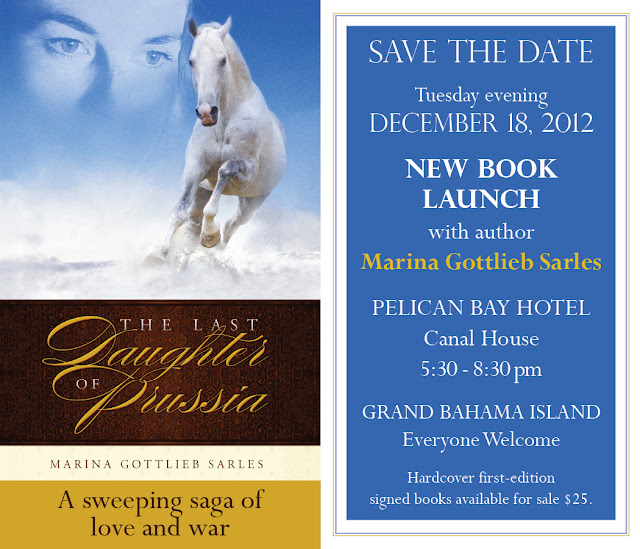 Save the date and be the first to get a copy of a brand new novel by Marina Gottlieb Sarles: The Last Daughter of Prussia. Please join us on Tuesday evening, December 18, 2012 at the Pelican Bay Hotel Canal House from 5:30 to 8:30 pm.

This historical novel is based on diaries and journals of the author's grandparents and tells the story of one of the least known chapters of World War II—a time that saw both great tragedy and great strength in the indomitable spirit of love. The author writes about her inspiration and background research for the book at her blog (click here).

This is an opportunity to purchase one of the first edition hardcover books signed by the author, which will be available for $25. The novel will be released in the U.S. and worldwide in the spring of 2013.

Marina Gottlieb Sarles is also the author of a favorite classic collection of island stories: Sand In My Shoes. A Bahamian author born in Abaco and educated in Europe and the U.S., Gottlieb-Sarles makes Grand Bahama Island her home, together with her son, Nikolai, and husband, James Sarles—President of Coldwell Banker James Sarles Realty.

Hope you can join us as we launch this new book on Tuesday evening, December 18th!

Nikolai Sarles: in his father's footsteps

Nikolai has Freeport in his blood as the son of James and Marina Gottlieb Sarles. His mother, a Bahamian author, is the daughter of the island’s first doctor and nurse—Dr. Eijnar and Owanta Gottlieb were medical practitioners brought in to serve the Pine Ridge lumber camp residents when early Freeport was being built. They later relocated to Abaco and served the Marsh Harbour and surrounding communities for many years.

Growing up in Freeport, Nikolai attended Sunland Baptist Academy before graduating from Ridley College in Ontario, Canada, and received his B.A. degree from Dalhousie University in Halifax, Nova Scotia.

No stranger to real estate, Nikolai grew up earning his allowance helping his father put up real estate signs, and lived and breathed real estate from a young age, absorbing knowledge and insights around the dining room table.

With his exposure to a wide range of real estate projects, Nikolai developed a keen interest in the commercial and development side of the business, and is looking forward to focusing on renovation properties, rentals, and first-home opportunities as he learns every aspect of the business.

Well-traveled and with family ties in many parts of the world, Nikolai could have chosen anywhere to live, but wanted to come back to his roots in Grand Bahama to build his future. “I am the next generation”, says Sarles, “and I would like to see the early promise of Grand Bahama renewed. As a young Bahamian, I look forward to helping other young Bahamians to get their start in real estate and home ownership.”

Nikolai Sarles is especially interested in revitalizing real estate that was part of the island’s mid-century heyday. As part of the next generation, Nikolai sees Grand Bahama’s glory days not only as history, but also as a platform on which to build a bright future for himself and his fellow Bahamians. 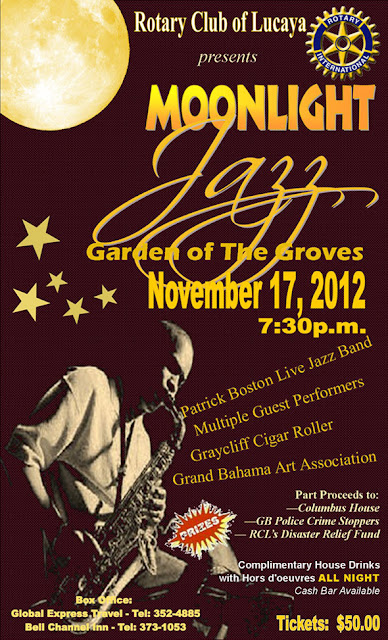 The 3rd Annual Rotary Club of Lucaya Moonlight Jazz event happens this Saturday evening, November 17, 2012, where smooth and vibrant jazz will fill The Garden of the Groves for a great cause, with part proceeds going to Columbus House for Girls & Boys, the Grand Bahama Police Crime Stoppers, and RCL's Disaster Relief Fund.

Talented local artists from the Grand Bahama Artists Association will also have their art on display and available for purchase at the event. Cigar aficionados will also be able to enjoy professionally handmade cigars from a visiting Nassau Graycliff Restaurant expert cigar roller.

The evening promises to be a don't-miss night of moonlight and music magic.  For full event information and ticket location information, click here.
Posted by James Sarles at 8:43 AM

Dear Friends,
It's time for James Sarles Realty's 4th Annual Basket Brigade, and so, like I have done each year for the past three years, I am asking for your financial help to continue our program. This has been an exceptionally challenging year on the island and we all must do what we can to help our fellow Grand Bahamians. The Basket Brigade is built on a simple notion:

"One small act of generosity on the part of one caring person can transform the lives of hundreds. It takes only one light to dispel the darkness, and even just one basket or a few, to bring hope!"

Each year, a few days before Christmas, our entire James Sarles Realty staff assembles food baskets so the recipients can have food over the holiday, including a Christmas Dinner. We find the most needy people on Grand Bahama through a variety of sources and acting as delivery people we anonymously deliver the beautifully prepared baskets throughout Grand Bahama Island with a simple note that says:

If you feel called to help our program please stop in the office or mail us a check to:

Thanks in advance for your help and support. 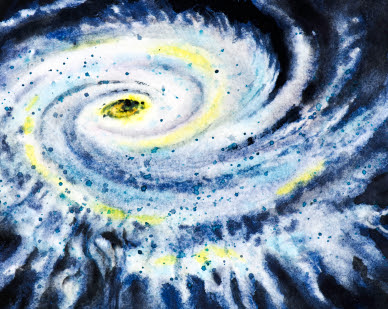 Our hearts go out to everyone who has been impacted by Hurricane Sandy —Grand Bahama residents and businesses who experienced heavy flooding at the airport, along parts of Queen's Highway, Queen’s Cove, Bahamia, Lincoln Green 1 and 2, Derby, Pine Bay, Windermere, and places along the eastern end of the island—as well as to our friends and part-time warm winter residents in the United States who felt the full brunt of the superstorm.

As of today, GB Power reports that 98% of island residents have power fully restored. Water is back on and internet/cable service has been reconnected in all but a few areas. The international airport has re-opened; the extensive damage to the domestic airport will take longer to rebuild. Landscaping clean-up efforts continue.

In a storm, everyone pitches in. The Grand Bahama Rotary Clubs worked together at their shared emergency water processing center to fill and distribute gallon jugs of water to areas hardest hit. 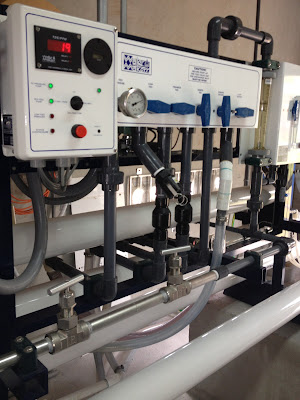 Here’s wishing everyone affected by this exceptionally severe weather system a speedy recovery and a better-than-ever bounce back.