Round One – swimwear and evening wear 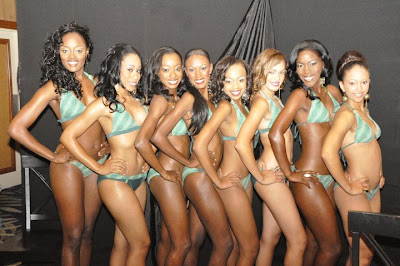 Photo by Sarrette Malario Ricaldeo
Contestants in the upcoming Miss Grand Bahama pageant competed Saturday night in what would be the first leg of the competition that counts toward the final scores – the swimsuit and evening gown categories.

The event attracted a full house at the Treasure Bay Casino, with friends, family members and other supporters of the contestants cheering wildly for their favourites. Also in attendance was the reigning Miss Grand Bahama Nikki Severe.

"The swimsuit and evening gown portion play a very important role in the pageant. This is where the young ladies receive the points for the top five semi-finalists. Then the top five will have their platform where they will talk about some project of their choice that they will do in the community and that will bring them to the top three," explained pageant co-ordinator Glenn Davis.

The eight contestants – Valdena Bain, Rayne Armbris-ter, McKishine Wilmot, Tempest Stubbs, Shequera King, Remi Henderson, Cindy Lewis and Celina McCardy – have already competed in the top model and talent portions of the competition, for which individual awards will be given.

They will participate in interviews with the judges on Friday, May 14 at the Pelican Bay Hotel at 8 p.m. before the final event that Sunday at the Hilton Outten Convention Centre.

The judges are now one step closer to crowning a winner and Davis said the contestants are really excited.

"The energy is so high right now. I can't wait until next week to see what the outcome is going to be," he said.

He said he was thrilled with the support the pageant has been receiving.

This year's crop of contestants, he said, has taken the pageant "to another level."

"I cannot believe the support we're getting from the public and the business community. It was quite interesting to see the crowd come out to support Miss Grand Bahama," he said.

The selection process was a gruelling one – he noted, all part of the committee's efforts to ensure that the best representatives are chosen.

The young ladies had to participate in training and workshops in etiquette, make-up, health and fitness, public speaking, presentation and runway technique.

The winner of the pageant will receive a two-year scholarship to Terreve College, a month-long, all expense paid trip to China, where she will represent Grand Bahama/ The Bahamas in the Miss Friendship International Pageant, as well as an all expense paid trip to Colombia to participate in the Miss Coffee International Beauty Pageant.
Posted by James Sarles at 8:37 AM