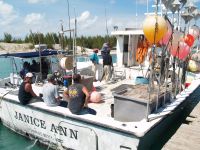 Four American men are expected to appear in court today charged with a number of offenses in breach of the Fisheries Act and the Bahamas Customs Act, after their fishing vessel was discovered in local waters without permits with approximately 7,000 pounds of fish on-board.

Petty Officer Jonathan Evans of the Royal Bahama Defence Force explained that at approximately 3:00 a.m. on Wednesday, officers were on routine patrol in waters about 35 miles off West End, when they spotted the boat, named Janice Ann.

The men on-board said the boat had broken down; however, the men were unable to produce any documentation showing that they were legally in Bahamian waters.

"We decided to take a closer look and upon doing that we realized that it was a long line fishing vessel, which is illegal in The Bahamas," Evans said.

When officers boarded the vessel and conducted a search, they discovered a large amount of assorted fish, including swordfish, wahoo, kingfish, dolphin and tuna.

Officers then reported their discovery to officials on land and were given instructions to detain the vessel until it could be pulled into the harbor at the Bradford Marine shipyard.

Evans said the team of seven officers left the Little Bahamas Bank at approximately 3:15 yesterday morning, and it took about 12 hours for the vessel to arrive at the Freeport harbor.

"Through a long day of work, efforts by my crew being very alert at all times, having to maintain law and order on- board to make sure that everything was safe and secure. They worked very well throughout the night,"Evans said.

"All of it is just in a day's work that we as the Royal Bahamas Defence Force has to offer to our country, to protect our fisheries resources and the other things that we are out here to do to protect our nation against illegal activities which are taking place."

Once docking at about 3:00 p.m., further investigations were conducted by the Department of Fisheries officials.

Assistant fisheries superintendent with the Department of Marine Resources Clement Campbell said, although the fish had not yet been officially weighed, he estimates that the amount found would be between 6,000 and 7,500 pounds.

"The equipment on the boat is totally different from what we use in The Bahamas, from what I see on the normal Bahamian fishing boats."

"There's about 20 or 30 miles of long line on that boat, so whatever catches that line is gone. That's a serious thing – we're highly opposed to that," said Campbell.

Also discovered on-board the boat was a shotgun, a handgun with some live rounds of ammunition and several knives.

Campbell said he receives complaints from local fishermen on a regular basis about foreign fishermen in Bahamian waters.

"I get complaints from all the fishermen every weekend, especially on holidays and good weather days, that the foreign boats are out there fishing ... We've got 100,000 square miles of water, so it's hard for us to cover all that area. So what we want the public to do is always be alert and tell us what's happening out there," he said.

"A lot of the fishermen who fish off of West Grand Bahama, where this boat was, always say that some of the boats that they run into have confrontations with them. They will be fishing with no permit, no entry fee, no customs, no nothing, which is wrong."

Campbell said the four men, ranging in age from 35-60 are expected to be charged in court today.