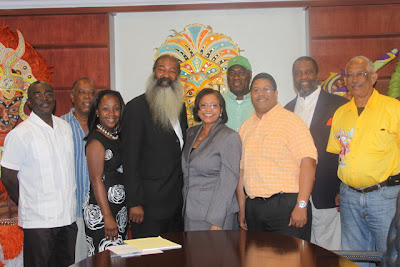 “Junkanoo is an integral part of our Bahamian culture, therefore, GBPA is more than pleased to sponsor the upcoming festivities,” she said. “The theme, ‘Rush For Peace’, is so appropriate in light of today’s social climate. In harmony with the aim of the organizers and similar to our company’s mission, it is our wish that this series of events will serve as a uniting force for the island’s citizenry, and by extension, residents of The Bahamas as a whole.”

Confirming official endorsement by the Ministry of Youth, Sports & Culture, was Deputy Director of Culture, Eddie Dames. Drawing on the proliferation of violent crimes on a national level, Dames suggested constructive antidotes. “One of the most powerful forces that we have found to be effective enough to draw persons together and have society interwoven toward one magnificent cause is the call of Junkanoo,” he stated.

According to Karen Ferguson-Bain, Public Relations, Junkanoo Promotions, “the object of ‘Rush For Peace’ is to stimulate the economy of Grand Bahama and to promote peace, love and unity within our nation, while showcasing some of The Bahamas’ top Junkanoo groups.” A Sunday, May 29 church service, to be conducted by Kingdom Worship Center, will mark the beginning, followed by a ‘March For Peace’ parade from downtown to Independence Park, later that afternoon. A subsequent youth rally includes featured speakers, a chase and capture exhibition by the Royal Bahamas Police Force K-9 Unit and a drill display by an all female rifle platoon.

On Thursday, June 2, a cultural expo and mix & mingle street party are planned for the International Bazaar, featuring a special performance by the Legends Marching Band. The premiere event, the ‘Rush For Peace’ Junkanoo parade, will take place on Friday, June 3. Competing for a $51,000 cash prize are, the Saxons and Valley Boys out of Nassau, and the Swingers and Majestic Crusaders from Freeport. A family fun day and all Bahamian concert on Taino Beach on Saturday, June 4, will bring the week of festivities to a conclusion.


“As an official sponsor, we are very excited to see the reintroduction of a June Junkanoo festival. This falls right in line with what we’re trying to do, to create a renewed sense of pride and enthusiasm for our island, which we believe will in turn translate into greater creativity and economic activity locally,” expressed, Peter Turnquest, president, The Grand Bahama Chamber of Commerce.

He also encouraged businesses on Grand Bahama to position themselves to take advantage of the influx of visitors expected for an event of this magnitude. “We will be on display in terms of our island. Along with superior customer service, we want to put our best foot forward and show the rest of The Bahamas and indeed the world, what we have here in Grand Bahama to offer,” Turnquest added.
Posted by James Sarles at 10:45 AM

Email ThisBlogThis!Share to TwitterShare to FacebookShare to Pinterest
Labels: junkanoo, rush for peace