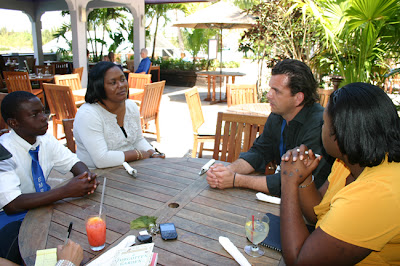 By Yasmin Popescu, Media Unlimited
Freeport, The Bahamas - Two time award-winning chef at Sabor Restaurant in Grand Bahama, Volundur Volundarson, a.k.a. 'Chef Worly' has decided to offer inspiration to a up and coming young chef.

After reading about the Bahamas National Junior Chef winner, 13-year old Joel Prenelus of Eight Mile Rock High School recently, Chef Worly wanted to meet the young chef to impart some very important knowledge. A lunch meeting took place on April 20th, where the chefs got the opportunity to meet and talk. Joel was accompanied to the lunch at Sabor by Joneth Edden, his subject coordinator; and Miss Chervita Campbell, hisguidance counselor.

During the meeting the world-renown chef said that he was surprised at the decision of Joel, at such an early age, to become a chef, stating that at 17 years himself, and while training to be a basketball coach, he had to take a culinary class; and it was this class that became the deciding factor to change his life path, and to pursue a career in cooking instead of basketball.

Chef Worly said that he wanted to encourage Joel and to let him know that there are many areas to the field other than the immediate joy of cooking. 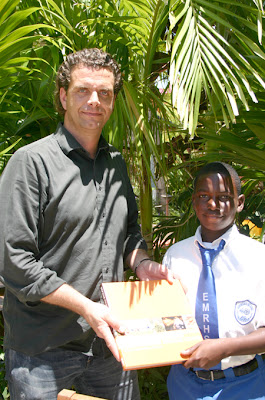 Chef Worly presents an autographed copy of his book "Delicious Iceland" to National Jr. Chef winner Joel Prenelus of Eight Mile Rock. Photo: Yasmin Popescu
Hailing from Iceland, Chef Worly has written a cookbook called “Delicious Iceland” that features recipes from his homeland. This cookbook has won two awards, one by Gourmand World Cookbook Awards as one of 100 best culinary books published in the world for the last 12 years; and the other is The Best Cookbook of 2007.

He has also written a similar cookbook for The Bahamas, having spent more than a decade here working in his field.

He is also working on his own cooking show, the first of course features Iceland and the another features cooking in The Bahamas.

Chef Worly said he has been watching the trend in the culinary field in this country and felt there was a lack of interest; and when he heard of Joel he wanted to help nurture the young man's interest.

He asked Joel to return to the restaurant for a few days in the summer so that they can show him how they work in the kitchen. Chef Worly further offered the suggestion that the two of them put on a gala evening featuring Joel’s culinary delights with the aim of starting a fund to further his education.

After winning the National Jr Chef competition just weeks ago, Joel has also been asked to take part in the College of The Bahamas' summer programme which will provide him learning for seven weeks in their culinary department.

Joel was most pleased with the meeting with Chef Worly and the collaborative ideas they discussed and is excited about pursuing his career. At the end of their lunch meeting, Chef Worly presented Joel with a copy of his award-winning hard cover cookbook “Delicious Iceland”.
Posted by James Sarles at 9:37 AM