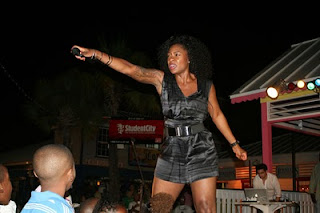 All photos Courtesy of The Bahamas Weekly.
Freeport, The Bahamas - R & B singer/songwriter , Jully Black (pronounced ‘Julie’) delivered a powerful and passionate performance to the delight of the locals and tourists gathered at the Count Basie Square, Port Lucaya Marketplace in Grand Bahama on March 17th, 2011. This was her first performance in the Caribbean.

Ms. Black sang about 6 songs and opened with the R & B song, "Seven Day Fool" which was first recorded in 1961 by Etta James. Black re-recorded it in 2007 and it was produced by Black Eyed Peas' drummer & songwriter Keith Harris. She premiered one song which have never been heard in her native homeland Canada called, "Crown Me" which will be out later this year when she releases her new album. Each song she delivered, Black had the audience right with her, never loosing any momentum from one great song to the next.

The Juno Award winner was also in town to film segments for CTV's eTalk, Canada's most watched entertainment news program in which Ms. Black is a Celebrity Reporter. 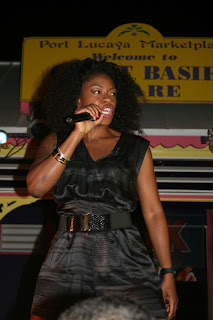 During her concert, which was filmed for eTalk, the audience was on their feet dancing and singing, while many of the local children remained up at the foot of the stage mesmerized by her performance. Black even came down into the audience at one point and let local and visitors dance with her while she sang. After the show she took all the time needed to satisfy those that wanted to meet her and obtain her autograph.

The trip was made possible in conjunction with the Bahamas Tourist Office in Toronto and was facilitated locally by the Grand Bahama Ministry of Tourism and the Bahamas Film and Television Commission. 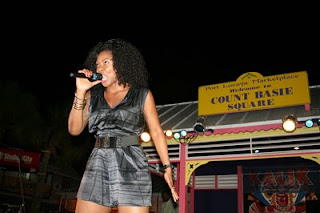 While on island for almost a week, Black enjoyed the many sites and cultural activities the island has to offer and was reunited with a niece who is a local school teacher.
Jully Black has collaborated with, and written for many notable Canadian, American and International artists including Nas, Missy Elliot, Saukrates, Choclair, Kardinal Offishall, Destiny's Child, and Sean Paul.

Stay tuned for a video interview with Jully Black from TheBahamasWeekly.com