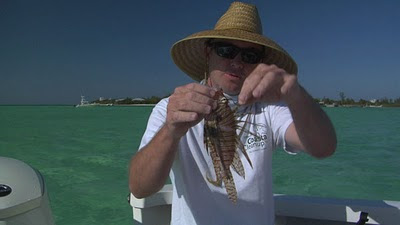 Nassau, Bahamas - The new Bahamian website Conch Salad TV (www.conchsaladtv.com) is now featuring The Lionfish Invasion starring Gary Richardson and Thomas L. Bethel, two Abaconians who are learning about lionfish and demonstrating ways to take action. The Lionfish Invasion was featured as a part of the Carribbean spotlight at the recent Bahamas International Film Festival in Nassau.

Using underwater footage the documentary explores what we know about these non native invaders, which are originally from the Indo-Pacific region of the world and are now a major threat to native juvenile fishes and invertebrates. It also documents some of the very interesting research and scientific projects being done in the islands. It turns out that there is not very much information about lionfish or the consequences of marine invasive species, so the Bahamas has become a living scientific laboratory

The film also demonstrates that lionfish can be safely caught, cleaned, eaten and sold. In fact, as Pherrol Duncombe, the chef at the Hope Town Harbour Lodge, demonstrates lionfish can be tasty and cooked several ways. Which is a good thing, since eating lionfish may be one of the only ways to stem their spread!

The film came about because scientists working on this issue in The Bahamas wanted to raise awareness of the problems the lionfish invasion is causing. They were able to make the case to the National Science Foundation, who provided funding through the University of North Carolina. A partnership was formed with scientists from these institutions, Friends of the Environment, an Abaco based education NGO, and Loggerhead Productions to produce the video. Loggerheads used HD cameras, both above and below water, to capture the exciting imagery.

Gary Richardson and Thomas L. Bethel came on board to host the video. They grew up together and have great on screen chemistry, plus both are passionate about local ecosystems. They were able to bring a Bahamian perspective, filled with humor, to an international audience. We hope this video will help make Bahamians, and others throughout the Carribbean, aware of the threats of lionfish - and show them not to fear lionfish, but to eat 'em.