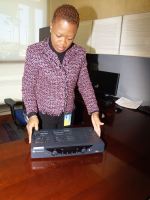 K. NANCOO-RUSSELL
Freeport News
Freeport, Grand Bahama- Following the lead of other developed nations, The Bahamas' sole cable provider, Cable Bahamas is working to upgrade its network to be fully digitalized and now that initiative has reached Grand Bahama.
Customers will now be required to have a digital converter to receive cable services.
The project will satisfy the requirements recently imposed on the company by the Utilities Regulation and Competition Authority (URCA).

The company has been moving steadily with its program, which began in April, with many areas in New Providence already being converted.

In Grand Bahama, there were four areas - Cagney/Fortune Bay Drive, Lincoln Park 3, Balao Loop and Rev. Wellington Pinder Estate - which would have been fully digitalized for some time now, having been brought onstream with that system when service was first installed in the those communities.

However, for other areas across the island, the process of conversion will occur in the upcoming months.

Edris Wilson, Cable Bahamas' operations manager for its northern Bahamas division, explained that each television set in a home will require a set top box.

"For customers whose areas have been transitioned or are in the process of being transitioned, their first set top box will be free, for customers who don't have a box at their home, any additional boxes will be at a price of $49.95 up to $150 per box, all depending on the model of box the customer opts to subscribe to," she said.

Customers can expect to receive three notifications via automated voice calls, over a two week period, advising them of the pending transition.

The final call to customers will be placed on the day before their area would have been officially transitioned.

"So those customers will get their final call at that time, reminding them that a set top box will be required, that their services as an analog network would have been discontinued, and they would need the box in order to have cable TV service available on the digital network."

The process in Grand Bahama began two weeks ago, she shared.

"We're going area by area. We've already started, there's an area just below the bridge, that would be those areas before the bridge, that are now currently being worked, in fact essentially that area is going to be the first to go," she said.

"(Then) we would have started with the Pinders Point, Hunters, Lewis Yard area, so customers in all of those areas would have already been contacted. Most of them, I would dare say 80-90 percent would have already come in, they would have already received their boxes, and so by the time the switch is ready to be flipped we probably will just have one or two and so we're easily able to deal with those the day of."

In addition to the calls to notify customers, agents have also been going door to door delivering brochures explaining the process.

Once the program has moved into a particular area residents are asked to visit Cable Bahamas offices and fill out a form.

"Then we would have had our technicians come out, install the box, so that everybody is primed and ready for when we're able to flip that switch and transition from one platform to the next," she said.

Wilson estimates that the process of converting all customers in Grand Bahama will be completed by the end of September 2011.
Posted by James Sarles at 12:25 PM