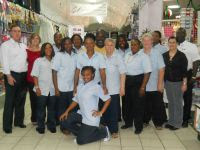 Forty years of reliable, professional service is what the management and staff of Park N' Shop prides themselves on, says William Howard Russell, president and CEO.

This month Park N' Shop celebrated 40 years of existence in the Grand Bahama community, offering its clients what they wanted over those years as products and needs changed.
Over the weekend management and staff held a reception and during that time The Freeport News got an opportunity to speak with Russell, who was pleased to share the store's past and future plans.
"When I came down here (from Abaco) in the 1970s we (along with his wife Molly) figured we'd come here for a few years and go back," Russell recalled, noting that at that time all the retail stores were owned by foreigners.
"We were really the first Bahamian one," he added.
He remembered the store first opening its doors near Royal Bank, operating out of a 2,000 square-feet space.
"A few years later we were able to move and got a 4,000 square-feet building and a few years after that we bought the Callaghan building which was 10,000 square-feet."
Russell said that he added another 7,000 square-feet and is in that very same building to date.
"There were people who told us 'no way you could compete with us' because they had international backing," Russell said, "they didn't realize that they were visitors in this country and we're Bahamians, and we were here to stay."
Now, he added, they are all gone.
Sustainability and stickability are two of the retail store's motto, Russell noted. Additionally, he credits the staff they have worked with over the years as well for the store's years in the community.
"Also, I believe, that we've lasted this long because we are giving the Bahamians what they want."
He explained that they try to bring in items the Bahamians want. "Not necessarily what I wanted, but what the customers, the Bahamian customers would like."
Russell said that is how Park N' Shop got started and that's how it remained in business.
"In the beginning we started out with figurines, artificial flowers and the like... that was 90 percent of our sales, that was what the people wanted and because there was nowhere they could go to get those things at a price they could afford we were able to establish ourselves in the community," Russell explain-ed.
After facing and overcoming challenges over the years, Russell said that Park N' Shop is looking forward to the next 40 years.
He admitted to having two "bad years" with the down- turn in the economy that is being experienced world-wide.
"We had two bad years ... this is the second year, but we've been able to stay open, we haven't laid anyone off and none of the staff is on short weeks," he revealed, noting that that is a result of them owning the building.
"So we've kept the business open and kept our staff on 40-hour work weeks," he said proudly.

He thanked the customers for their loyalty for the past 40 years, noting that Park N' Shop tries to please its customers daily, by offering them the best prices and prices they could afford.

"We bring in any item and if there is another store that offers it cheaper or at the same price, we will beat those prices for our customers, no matter what it is," Russell said.

"So for the next 40 years we will be here, we are Baha-mians we have nowhere to go," Russell added.
Posted by James Sarles at 8:57 AM