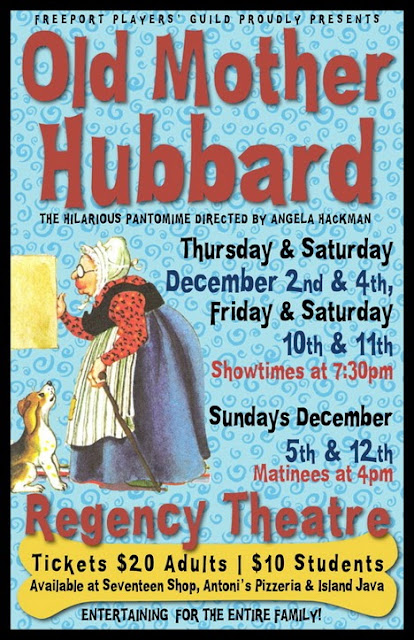 FREEPORT, Grand Bahama -- An adaptation of a long time nursery rhyme classic, Old Mother Hubbard, will be put on by the Freeport Players Guild at the Regency Theatre beginning December 2nd.
Director Angela Hackman explained that the production is actually a pantomime, and that although the word conjures up for the average Bahamian thoughts of robed, gloved dancers with white paint on their faces, it actually has another meaning altogether in England.
"It has its traditions - usually the dame is supposed to be played by a man and they're not supposed to look like a woman, they're supposed to be outrageous looking and they are the comedic figures. Usually as well, the principal boy is played by a woman."
Old Mother Hubbard will be performed on December 2nd, 4th and 5th and 10th through 12th by some 30 cast members of all ages.
"There's the evil duke who tries to break them up, there's the wicked witch, there's always a witch in there, there's always another comedy duo," she said.
The pantomimes are a popular Christmas tradition in England, she continued, where whole families go out to enjoy the show. The Guild used to put one on every year, she added, but had not done so for a long time.
"I thought it was time to bring it back. It's not just for children, there's a lot of interaction between the audience and the cast, but there's a lot of adult humour that the kids just don't get. There's a lot of slapstick humour too, and surprises, and of course because we're in Freeport there's a lot of topical jokes," she said.

Tickets are available at the Seventeen Shop, Island Java and Antoni's Pizzeria for advance sales and at the Regency box office one hour prior to show times. Special family rates for Old Mother Hubbard - 1 Adult + 3 children only $40! Don't miss the raffle either, you could WIN a Nintendo DS3!
Posted by James Sarles at 11:12 AM