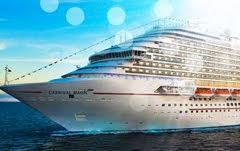 Freeport, Bahamas - Cruise ferry traffic to Grand Bahama Island is up 36 percent in the first seven months of 2010 compared to the same period of 2009, and a dramatic upswing in stopover visitors from the ferries has brought greater revenue to the island.

Much of this increase can be attributed to the decision by Bahamas Celebration to end its Ft. Lauderdale to Nassau itinerary in March in favor of calls to Freeport from West Palm Beach. In addition, Discovery Cruise Lines out of Ft. Lauderdale changed their product offering and ramped up their marketing activity, resulting in significant growth for them. Arrival numbers have been verified by the Ministry of Tourism up to the end of July and compared to the corresponding period for 2009.

David Johnson, deputy director general of the Ministry of Tourism & Aviation, pointed out that the increase was realized throughout the cruise ferry industry in Grand Bahama.

“The numbers show that Discovery Cruise Lines over the same period registered a substantial growth even when we take away the April windfall because they hardly operated in April of 2009 due to severe mechanical difficulties,” Mr. Johnson said. “For May/June of this year, they attracted 39 percent more traffic.”

Substantial numbers of cruise passengers are staying overnight on Grand Bahama Island, contributing handsomely to the spending on the island, according to Ministry of Tourism & Aviation tallies. In a single sailing on a particular day, the Celebration registered over 700 stopover visitors out of 1,200 passengers, Mr. Johnson said.

In many ways, this is incremental revenue for the island’s principal resorts, he said.

For the year, Discovery Cruise Lines and Bahamas Celebration passengers have accounted for 69,123 room nights. The stopover visitors from the cruise ferries have generated well over $5million in revenue for Grand Bahama resorts.

Terrance Roberts, director for Business Development in the Ministry of Tourism & Aviation, said large and small business operators in Grand Bahama have been noticing increases in their revenue due to the upswing in cruise ferry traffic. Taxi drivers, water sports operators and various vendors are among the Bahamians who have been tapping into the increased business, he said.

This direct spending is in addition to the $20 per passenger departure tax paid to the government.

Michael Weber, general manager of the Radisson and Reef Village at Our Lucaya, said the increased numbers of cruise ferry passengers have made all the difference in business this year.

“They have made an impact this year versus last year without question,” he said. “We have increased on both sides – Discovery Cruise Lines and Bahamas Celebration. It’s been a double bang for us.”

Mr. Weber said Our Lucaya has been working with both cruise ferry operations. As a good partner, they have been involved with joint promotions that have helped to boost revenue.

The healthy rise in business is obvious with just a quick walk through the Our Lucaya property, Mr. Weber said. He said the bustling activity has put resort employees on a more steady economic footing than in the previous year. Many resort staff were working only one or two days per week last year while this year they are enjoying four and five day work weeks.

Mr. Weber said vendors and other business operators on Grand Bahama should be thankful for the improved financial position.

“If they look back and compare, they should be very grateful and appreciate what we have,” he said. “This place is hopping.”

Nako Brice, a taxi driver and tour operator, has also taken notice of the increased business from the cruise port. Now that more visitors are coming in, Mr. Brice said the island must work to develop more activities and attractions to occupy them.

In addition to the increased traffic from Discovery Cruise Lines and the Celebration, Mr. Brice has seen a jump in the number of passengers arriving aboard Carnival Cruise Lines as well. Between January and July, Carnival moved from 163,299 passenger arrivals to 263,071 – an increase of 61 percent.
Posted by James Sarles at 9:22 AM