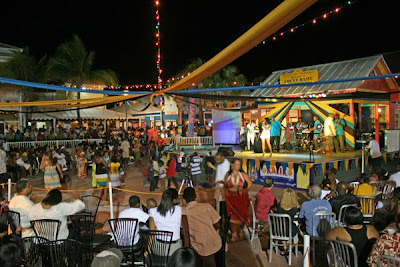 Freeport, Grand Bahama Island - Hundreds of locals and tourists came out to Port Lucaya Marketplace to enjoy the ”Bahamian Diva Kalik Independence Concert” on July 10th. The event was in support of the Bahamas’ 37th Independence. 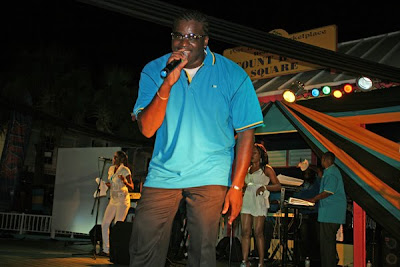 A lead singer from the XXtra band from Nassau performs on July 10th at Port Lucaya Marketplace TBW photo: Robbin Whachell
On stage were performances by the Deep South Island Boyz, the Port Lucaya Dancers, the XXtra Band from Nassau, Sonovia Pierre, Nita, Veronica Bishop, Simply the Best, Trez & Da Juice and Raquel Oliver. The night culminated in a fireworks display by Brad Bethel and a Junkanoo rush. 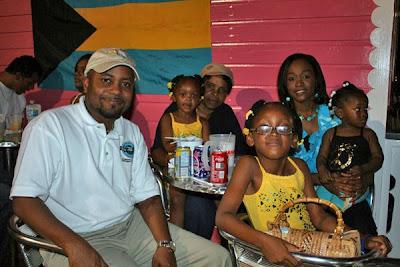 Kwasi Thompson, Member of Parliament for Pineridge and family. TBW photo: Robbin Whachell
Locals, many dressed in their country colours along with tourist enjoyed the show or danced in front of the stage. Kalik representatives handed out Kalik gift items to persons enjoying their product at the surrounding bars of Port Lucaya Marketplace. 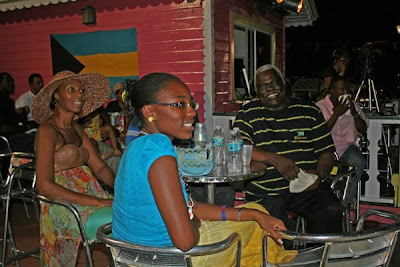 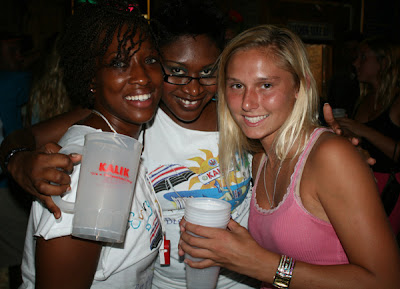 Two from the Kalik Team offer free gifts to a visiting tourist at Rum Runners at Port Lucaya Marketplace for trying their product.
Posted by James Sarles at 12:26 PM