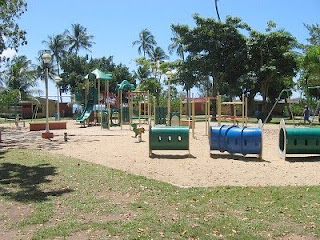 After agitating for about 10 years for a community park of their own, residents in the Regency Subdivision will finally get their wish as Member of Parliament for Lucaya, Neko Grant and officials of the Freeport City Council (FCC) have joined together to build a park in the area.

Grant who also serves as the Minster of Public Works, held a contract signing ceremony late Friday afternoon, awarding Dexter Edwards of Glorious Works with the $74,000 deal for phase one of the project.

Grant noted that when he was elected for the Lucaya Constituency back in 1992, he was faced with many challenges.

"One of the challenges that that concerned me the most, since most of my adult life has been centred around the development of young people, was the absence of proper playground facilities throughout the constituency," Grant said.

"I was pleased that with the assistance of the FCC we were able to construct Sunset Park, opposite the St. Georges High School. We were also able to build a park in the Royal Bahama Estates but moving west in the area, it was void of parks."

He thanked the Grand Bahama Port Authority (GBPA) for generously providing the land for the park in the South Bahamia Regency area and said the land has already been cleared with the funds provided by the government to be used in the constituency.

Grant explained that the first phase of the park's development would involve landscaping, planting of trees and a playground facility. 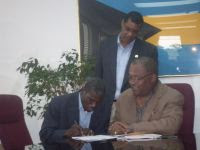 Out of the four bids submitted for the job, Grant said that Edwards and his company were awarded the contract and he is confident that the best quality of work will be produced.

According to Edwards, the project is one that is made up of about 60 percent of material and they plan to have it completed in just four short weeks from the point when all of the resources are available.

"With this job we have to use some heavy duty equipment to rip the ground and prepare the surface for the planting and the seeding of the park itself. This job will need 15 persons that we have yet to employ so it will also produce work for some persons."

A memorandum of understanding was also signed between the government and the FCC to partner in this venture, both contributing $37,000 each toward the project.

Chief Councillor of the FCC, Alvin Smith, said that they were pleased to be a part of this development as they are mandated to establish green spaces within our community.

"We also felt it necessary to develop parks because we have to preserve safe areas for young people within our own communities. There is nothing better than a park," Smith said, adding that it was equally important to create an environmentally friendly atmosphere.

Regency resident Jennifer Ellis said that this was a proud moment for (she and others) of the area after waiting for 10 years.

"We are thankful for the Member of Parliament for seeing the need to offer his funds to assist us and I know that it will bring joy to the residents for generations to come.

Once all phases of the park are completed, it will include a walking track, playground equipment, a Gazebo, tennis court and bathroom facilities.

Grant said that this venture is an expensive one, therefore it has to be done in phases to get the job done.
Posted by James Sarles at 10:22 AM