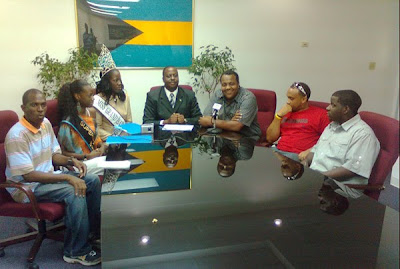 FREEPORT, Grand Bahama – Come July 10th The Bahamas will observe its 37th anniversary as an independent nation and on Grand Bahama Island every effort is being made to sensitize Bahamians on this most important part of the nation's history.

Two weeks ago, the Honourable Neko C. Grant, Minister for Works and Transport, who also has responsibilities for Grand Bahama Island introduced the Grand Bahama Independence Committee to the Bahamian public, noting that there are a number of new faces on the committee, designed to bring fresh ideas and get people excited about the celebration.

While introducing the Committee, headed by City of Freeport Administrator Don Cornish, Mr. Grant, who is the Member of Parliament for Lucaya Constituency on Grand Bahama, assured residents that the 2010 celebrations promises to be the best ever and that the Committee had already drafted an exciting program.

He was also keen on pointing out the theme for the 2010 Independence Celebration, “Celebrating Independence Through The Eyes Of Our Youths,” and stressed that every effort will be made to ensure young people's participation in the celebrations. 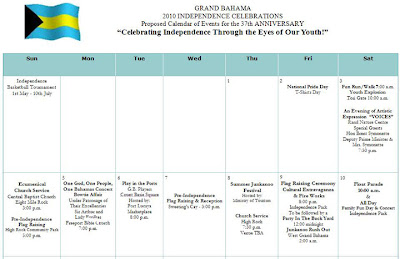 On Tuesday, June 22, a number of youth leaders from throughout Grand Bahama joined committee chairman, Mr. Cornish, and cultural affairs and entertainment chairman Kevin Tomlinson at encouraging Bahamians young and old to take part in the many activities planned, during a press conference at the Office of The Prime Minister.

While encouraging persons to take part in the overall celebrations the young persons was particularly keen on drumming up support for the Fit Nation Fun Run Walk and the Youth Rally which kicks off a week of Independence activities beginning Saturday July 3, 2010.

In her remarks, Miss Grand Bahama pointed out that Independence celebrations are enticing to all Bahamians, especially the youths.

“Our youths today must gain the importance of our independence and this year we are setting the foundation,” she stated.

Directing attention to the theme for the celebrations, she said that in Grand Bahama young people have the opportunity to participate and engage themselves in all the activities planned from July 2 to July 10.

Bruce Russell, Assistant Pastor at Calvary Temple, noted that the Youth Explosion (rally) which takes place after the Fun Walk at the Tori Gate in the International Bazaar promises to be a fun time.

He said invitations were sent out to all the churches “and we are really hoping that we get a good turnout from all of the youth groups. I hope that everybody turns out. This is a time when we as young people can come together and really show that we are a nation under God, a Christian nation and to let God’s glory shine and just to express our love for God.

“I believe that this is something that is very important, that as young people we need to come together and make a stand to let this island and let the country and the world know, that they throwing us away, but we are going to stand strong and let them know we are here and we are not going to give up and we are not going to the dogs,” he said.
Posted by James Sarles at 10:48 AM