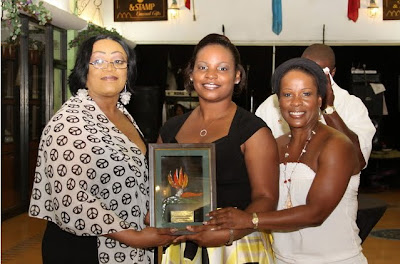 FREEPORT, Grand Bahama -- Guests were mesmerized by the transformation of the arcade at the International Bazaar as they arrived at the Red Rose Ball Cocktail Reception "A Black & White Affair in Paradise" on Saturday, May 15th, 2010. Shops in the arcade were opened for one hour during the event to allow attendees to take a glance inside or even purchase items. Following the black and white theme of the event, guests looked stunning in their colour coordinated cocktail apparel for the evening.

The Red Rose Ball Committee left no stone unturned in putting a personal touch to the ambiance of the affair. The entire arcade was magnificently transformed with black silk draping behind the bandstand, black and white silk draping intermingled with an array of colours from the Bird of Paradise flower at the entrance, and twenty-five tall cocktail rounds covered with black and white draping also using colours depicting the Bird of Paradise flower showcased simple elegance and a night to be remembered. The table top accent piece completed the décor - a large bowl filled with water and an array of colourful bird of paradise flowers. This elegant décor really set the atmosphere for the event.

The soothing sounds of soft jazz music played by the DJ set the mood. Early attendees were given surprise complimentary gifts courtesy of 1.9.6 the Experience and China Arts and Craft. On site, candid photographs were taken by Mr. Reginald Farrington as a personal keepsake of the event. Master of Ceremonies extraordinaire, Mark Gardiner, wasted no time as he pumped up the volume and got attendees excited and hoping for a raffle prize win. The in-house raffle prizes were generously donated by stores in the arcade and other businesses in the community, however, the grand prize was what everyone was waiting for ... a weekend stay, donated by our local five star resort - Pelican Bay at Lucaya. 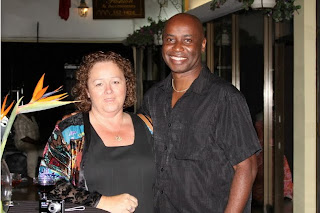 The evening continued with stimulating information regarding HIV/AIDS education in our community, our country and our world by Mrs. Sandra Mortimer-Russell, former Chairman (8 consecutive years) and founding member of the Grand Bahama AIDS Awareness Committee (GBAAC). The Grand Bahama AIDS Awareness Committee helps to save more lives by developing, evaluating, implementing and supporting innovative prevention programs; the programs are designed to reach a variety of audiences through the defined theme: PREVENTION NOW.


The Grand Bahama AIDS Awareness Committee educates people on how to stop the transmission of HIV, encourages people to respond in informed ways to people who have HIV, and helps people apply the facts about HIV to their behaviours. Knowing this, it was easy to appreciate the support received from all in attendance, especially the business owners of the International Bazaar during these hard economic times.

Co-sponsors of the event included Paradise Jewels, Executive Partners, the Grand Bahama Port Authority, Grand Bahama Health Services, Polymers International, Nesbitt Rentals, and partners Bank of Nova Scotia and 1.9.6 The Experience were all given personalised plaques for their unselfish support of this annual event by the Chairman of the Red Rose Ball Committee Odette Knowles and Red Rose Ball Committee Finance Officer, Minerva Kemp. The vote of thanks to all was given by Minerva Kemp, RRB Committee Finance Officer. 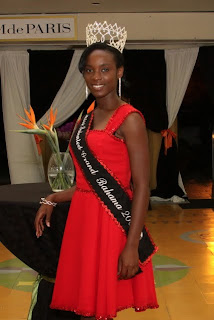 As the night progressed attendees mingled, chatted and laughed with acquaintances, supporters and old friends, while enjoying an assortment of finger foods prepared by the newly-opened Le Rendezvous restaurant and an all-inclusive array of wines by Bristol Wines and Spirits which flowed until the end of the evening. 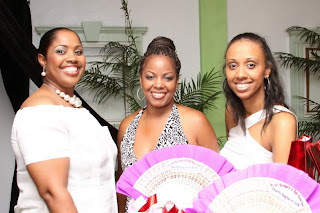 Another highlight was the tasting of original Cuban rum and individually rolled Cuban cigars, rolled and served during the event courtesy of Havana Trading. Then it was time for the performing live band, the ever popular Matrix Band, to liven things up some more giving the crowd just what they wanted. The evening ended around 11:00pm. Supporters were pleased they came out and made a difference, having fun while supporting a worthy cause.

The Red Rose Ball Committee wishes to thank the sponsors, partners, attendees and the general business community for all their efforts in support of HIV/AIDS education. Thank you and see you at the Ball on November 6th, 2010!
Posted by James Sarles at 10:26 AM