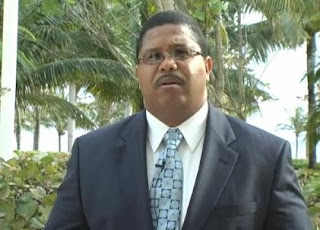 Freeport, Grand Bahama-  The decision by government to increase taxes on the tourism product was questioned yesterday by the president of the Grand Bahama Chamber of Commerce K. Peter Turnquest, who said, it was a difficult thing for the island's already ailing tourism industry to stomach.

During the official budget communication in the House of Assembly on Wednesday, Prime Minister Hubert Ingraham said, the air and sea departure taxes are being increased by $5 effective on July 1, and the increase for cruise ship passengers becomes effective on October 1. The hotel room tax is also being increased to 10 percent of the room rate effective July 1.

"With respect to the increase in departure taxes in particular, I regret that we have to take that kind of action. In Grand Bahama in particular the cry has always been that the cost of air arrivals have been extraordinarily high in comparison to The Bahamas and even in the rest of the Caribbean so this additional tax will not help our situation any," Turnquest said.

He expressed hope that there will be some off-setting of that increase by the Grand Bahama Airport Company.

"I would have preferred to see the Government, maybe, consider the individual islands' circumstances a little different than just painting the whole picture with one brush," he said.

"For instance, we know that the tourism product in Nassau is mature, it is active and vibrant for the most part so maybe they can bear this $5 increase but the islands where the cost of getting there is already higher, maybe we ought to be considering giving them the concession and leaving the rates as they are just to encourage the traffic to go on and spread the revenue throughout the islands."

The increase in the hotel tax, Turnquest added, would have the effect of putting hotels at a disadvantage with respect to the cruise ships. He said he believes that is not a wise move since there is a large disparity between the onshore spending of an overnight tourist versus a cruise ship tourist.

"So it seemed to me that we would have tried to figure out some way to get more out of the tourist that comes by cruise ship rather than milk an already stressed hotel industry."

On the other hand, Turnquest said, he approved of the Government's decision to make some cutbacks within the public service. Ingraham revealed that the provision for overtime within the service is being reduced from $10.4 million to $1.5 million.

"I noticed some comments from the public service union that maybe you'll have to hire more people to take up the slack for that overtime," Turnquest said.

"On the contrary, I think that it may be time now for the government to go further in terms of reforming the public service, look at things like casual and sick days and the amount of vacation that is given to civil servants, maybe we've reached the point where we just cannot afford those things anymore."

Meanwhile, the salary cuts for the Prime Minister and the cuts to the allowances for ministers and top civil servants Turnquest said was absolutely the right thing to do as "It demonstrates tangibly that they understand the situation that we're in and that cuts are going to be necessary for all of us and they're leading the way in that regard, so I give them much approval for that," he said.

As for the incentives the government provided for residents wishing to be more environmentally-friendly, such as reductions to the duties for tankless water heaters and LED light bulbs, Turnquest said in his opinion they should have gone even further and made other items like solar panels, solar water heaters and inverters duty free.

"They have the right idea but I don't think they've gone far enough. There's no need for the size of vehicles that we're driving today and so they should have gone down to not only on engine size but actually length size and maybe bring that rate a little lower and take the large car rate higher," Turnquest suggested.

"If you can afford to buy that big gas-guzzling car that is a polluter and a drain on our energy you should pay for it. So I would have liked to see the car size go smaller and the rate of duty go lower in proportion so that we can cause our people to start thinking about the use of energy."
Posted by James Sarles at 4:42 PM