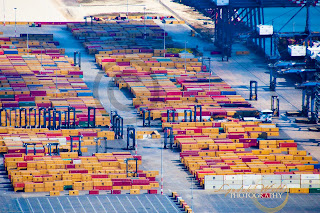 FREEPORT, Grand Bahama -- The Freeport Container Port will mark another milestone when the world's largest container ship docks at the facility this month, its chief executive revealing that expansion plans involve the addition of 10 more cranes and six berths - to make 2,000 metres of quay berthing space.

Gary Gilbert, who is chief executive of Freeport Harbour Company, Freeport Container Port and Grand Bahama Airport Company, disclosed that the container port was expecting a container vessel bigger than Royal Caribbean's Oasis of the Sea, the world's largest cruise ship, to dock on February 15-16.

"If you are here...you will see the largest ship coming into this hemisphere at 8,800 containers, which will be docking, and another the following week. They are massive - if you thought Oasis is big, come and enjoy the sight," he told attendees at the second annual Bahamas International Maritime Conference in Freeport.

Mr Gilbert said Grand Bahama's harbour was the deepest and largest in the Caribbean, providing the foundation for the most diversified port in the Western Hemisphere.

"The harbour continues to grow larger daily. We actually harvest vast amounts of limestone, and create depth that is the deepest harbour in the region and hemisphere," Mr Gilbert said.

He believes the Freeport Container Port has a very bright future, describing it as one of the proud jewels of Hutchison Whampoa's investments in Grand Bahama.
With a channel draught of 16 metres, Mr Gilbert said the Container Port can accommodate the largest container ships in the world. It has capacity for 1.5 million containers, and the 24-hour operation employs 700 employees.

He added that as part of the container security initiative and mega ports security port, the Freeport Container Port has screened more than 2.5 million containers since 2005.

"We check for radiation in every single container, and we had people trained with the US Department of Energy. We started it in 2005, and we are the very first to start it globally," Mr Gilbert said.

He added that expansions were continuing at the Freeport Container Port, saying: "We are looking to have quay berth of almost 2,000 metres with 16 post-Panamax cranes. We have two harbour cranes, 10 gantry cranes and 94 straddle carriers.

"We are working to create a Caribbean feeder berth for ships that come from Europe and Asia," he added.

"We are looking to add six more berths for a total of 10, and bring in another 10 cranes. Every day our harbour gets deeper and larger as we mine rock with Bahamas Rock and it is a win, win you can have environmentally."

The cruise port facility has seen also significant improvements, Mr Gilbert said. He added that some $20 million was spent on refurbishment of the facility, which has a retail village and two major cruise berths.

Mr Gilbert said investments have also been made in the Airport and in the development of a Sea Air Business Centre.

The newly-rebuilt airport has an 11,000-foot runway, a new passenger terminal and control tower.

"We have a brand new post-9/11 secure airport that can take any plane that flies today, and we have US pre-clearance for all destinations in the US," added Mr Gilbert.

He said the Sea Air Business Centre, situated on 750 acres of land between the airport and harbour, provides a great opportunity for attracting businesses to Grand Bahama.
Posted by James Sarles at 4:02 PM