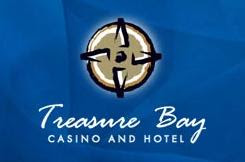 BY VANESSA CLARKE
Internationally renowned Treasure Bay Gaming Resorts officially took the reins of the Isle of Capri at the Our Lucaya Resort today nearly three months after Prime Minister Hubert Ingraham announced that the company would be taking over operations in an effort to save some 200 jobs and revitalize the struggling tourism industry in Grand Bahama.

Isle of Capri first announced that it was pulling out on May 31.

Since then employees there were very concerned about their futures under new operators.

The Bahamas Government offered to make severance payments for those wishing to part ways with the casino, but Minister of Tourism Vincent Vanderpool-Wallace told them that if they chose to go that route, Treasure Bay would not be obligated to rehire them.

He said that the government wanted to ensure that persons who wanted to sever their relationship with the company, would be provided with adequate severance packages, even though there was to be no change in the actual ownership of the casino.

Employees later began fighting to gain job security even if they had elected to take the severance package.

Even though the casino will remain closed until December 1, employees have already been hired to help with clean-up efforts.

The casino will later re-open under its new name.

Employees say they are excited about what he future with Treasure Bay will bring.

It was in September when Prime Minister Hubert Ingraham revealed that the government was "painfully" paying the cost for the continued operation of the Isle of Capri Casino.

This, he said, was just one of the concessions the government has made with Treasure Bay as it goes into Grand Bahama to operate the casino.

He said having to use money out of the public treasury to run a casino, was not something he was comfortable with. But, he noted that unusual times call for unusual decisions.
Read the ORIGINAL SOURCE HERE
Posted by James Sarles at 9:29 PM