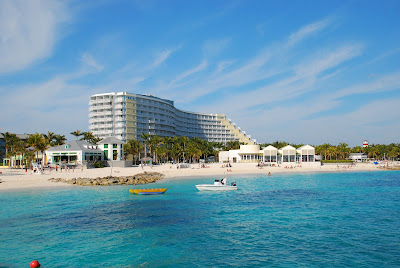 The Government will know "in the next 24-48 hours" whether its preferred choice for Foxwoods Development Company to take over the Our Lucaya Resort's management/operations, as well as its casino, is back on track, Tribune Business was told yesterday.

The Tribune speculates that the deal, which has involved three-way negotiations between the Government, Foxwoods and Our Lucaya's owner, Hong Kong-based Hutchison Whampoa, has "come alive again" after previously hitting the proverbial 'brick wall' over the issue of who would manage/operate the hotel component.

Vincent Vanderpool-Wallace, minister of tourism and aviation, confirmed to Tribune Business that the Government had been in contact with both Hutchison Whampoa and Foxwoods within the last 24 hours as it moves rapidly to revive a deal it sees as key to placing Grand Bahama back on the resort/casino/tourism map.

Tribune Business had contacted Mr Vanderpool-Wallace after being told by numerous sources familiar with the situation that the Government's preferred solution for Our Lucaya, namely for Foxwoods to take over management and operations at the hotel as well as the casino, had died a death.

"No, it's not dead," Mr Vanderpool-Wallace replied. "We have been in contact with them [Foxwoods] this morning, and Hutchison last night in Hong Kong. The answer is that it's not dead."

The minister added that the Government did "not yet" know the precise nature of any agreement that might be worked out between itself, Foxwoods and Hutchison Whampoa, "but we'll get a good sense of that in the next 24-48 hours".

Confirming that any deal would not involve "a purchase agreement", where Foxwoods would acquire Our Lucaya from Hutchison Whampoa outright, Mr Vanderpool-Wallace told Tribune Business: "These things are complex. You never know what form it will take."

However, other sources familiar with the situation told Tribune Business that the main sticking point to any successful agreement involving Foxwoods was who would run/manage the hotel component at Our Lucaya.

"The Government's preferred choice is Foxwoods, because not only will they take over the casino but brand the hotel," one source confirmed. "But they [Hutchison] would prefer to lease the casino and keep their staff in place. Foxwoods would come in and brand it with their own management.

"The sticking point is the way in which the relationship would move forward with the running of the hotel."

In other words, Hutchison Whampoa would be happy with a situation somewhat resembling the status quo, where the casino was leased to a third-party operator and it was able to run and manage the hotel itself.

The Government, though, wants Foxwoods to take over the management of the entire complex, and use its brand and gaming marketing database to put Grand Bahama back on the tourism/casino map. It would thus seem that the key to any deal would be for Hutchison Whampoa to shift its position to one more in line with the Government's thinking.

One source emphasised to Tribune Business that Treasure Bay Casino and Resorts Inc, the previously announced replacement for Isle of Capri as the Our Lucaya casino's operator, was strictly a second or 'fall back' choice behind Foxwoods.

"The Government would prefer Foxwoods because they offer us a global brand," the source said. "The deal had reached an impasse, then there was nothing and the second choice, Treasure Bay, the Government was going to deal with them. Then it came alive again."

The Government's main concern is that the status of Grand Bahama's tourism and resort industries continues to decline, sources said, with Our Lucaya's brand or 'flag' quality having dropped from Westin/Sheraton to a Radisson. Foxwoods' presence is being viewed as a move to reverse this.

Foxwoods' interest in the Bahamas, and Grand Bahama in particular, came to the fore several years ago when it was unveiled as the casino brand operating partner for the Royal Oasis, following Harcourt Developments' acquisition of the property. However, the global credit crunch and subsequent recession stalled Harcourt's plans to redevelop the property.

And Foxwoods was also interested in the proposed multi-billion dollar Bahamas Golden Beach Development project which, earmarked initially for a site in eastern Grand Bahama, was then switched to a possible site in Freeport. No progress appears to have happened there either in recent times.

The Government would appear to have some leverage, potentially, through which it could encourage Hutchison Whampoa to come into line with its thinking on Our Lucaya and the Grand Bahamian tourism market generally.

That is the potential scenario being created for Hutchison Whampoa to acquire the Grand Bahama Port Authority (GBPA), provided a settlement can be worked out between the warring current owners - the Hayward Family Trust and the late Edward St George's estate.

As Tribune Business previously revealed, the Government has moved to create pressure for a settlement between the families by only renewing the work permit of GBPA chairman Hannes Babak until year-end - a move seemingly designed to sever what are perceived to be the links binding him to Sir Jack Hayward.

This, so the theory goes, is designed to nudge Sir Jack towards settling with the St George estate. Once this happens, the Government's hope is that the families would then sell the GBPA to Hutchison Whampoa, which has some $1 billion in equity invested in Freeport via its interests in Our Lucaya, the Freeport Container Port, Grand Bahama Development Company, Freeport Harbour Company and the Grand Bahama International Airport Company.

Such a solution would once not have been contemplated by the Government, but it is now willing to look at such a solution given the extraordinary economic times in which it finds itself.

Foxwoods, which was founded and is owned by the Mashantucket Pequot Tribal Nation in the US, would certainly fit the bill when it comes to placing Grand Bahama on the map. The company now has six casinos that collectively offer more than 6,200 slot machines and 380 tables for 17 different types of table games, including 100 for poker.

The company boasts of being the largest casino in North America, with 340,000 square feet of gaming space in a complex that covers 4.7 million square feet. More than 40,000 guests visit it each day.

Accommodations at its Connecticut resort total 1,416 guest rooms and suites, and Foxwoods features more than 55,000 square feet of meeting space and 25 conference rooms.