If you were expecting Bruno - Forget about him! 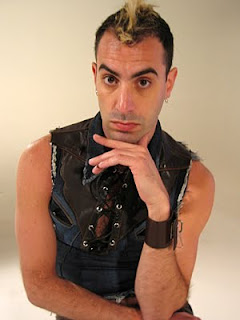 'Bruno’ The latest movie by British actor Sasha Baron Cohen , which stars Cohen as a homosexual Austrian fashionista, has been banned in The Bahamas. For many who may have watched Baron in "Borat: Cultural Learnings of America " which was a 2006 mockumentary comedy film directed by Larry Charles and distributed by 20th Century Fox, this will come as a great disappointment.

In Borat, British comedian Sacha Baron Cohen starred in the title role of a fictitious Kazakh journalist traveling through the United States, recording real-life interactions with Americans. It seems that The ban may be due to the movie containing sexually explicit scenes and vulgar language and therefore The Bahamas film & Television Commission have decided to give Bruno the axe.

The Bahamas is not the only country which has banned Bruno. According to MSN Entertainment, the movie has also been given the axe in the Ukraine, Lebanon and Malaysia.

(Following Controversy which surrounded Borat before & during it's release. The Bahamas film & Television Commission It was denounced for having a protagonist who is sexist, homophobic and antisemitic (although the director, and both producers—including Baron Cohen—are Jewish), and, after the film's release, some cast members spoke against, and even sued, its creators. All Arab countries, except for Lebanon, banned it, and the Russian government discouraged cinemas there from showing it. It was released on DVD March 5, 2007 )