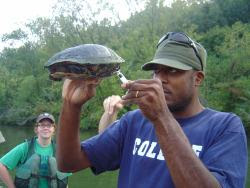 TENNESSEE, USA -- A young Bahamian scientist’s groundbreaking study on freshwater turtles has earned him the opportunity to be featured in one of the world’s leading international journals. Stefan Moss, who spent two years collecting samples and data from the reptiles he encountered in the Tennessee River will now have the findings of his research documented in Chemosphere.

Chemosphere is a well-known international journal focused on disseminating information related to all aspects of environmental science, especially important new discoveries or further developments in important fields of investigation related to the environment and human health.
Hard work has certainly paid off for Moss who was born in Grand Bahama but raised in the capital city of Nassau by his parents Keith and Sylvia Moss Greenwade.

He double majored in Chemistry and Biology and plans to duplicate his efforts on the Tennessee turtles to the endangered freshwater turtles in his native Bahamas, particularly on the islands of Inagua, Cat Island and Eleuthera.

“It didn’t start off as me with aspirations of getting published in a respected journal like Chemosphere,” admits Moss. “As an environmental scientist, I was more focused on figuring out what chemicals were in the river and their affects on the environment, and possibly human health. Instead, it seems I uncovered - and documented - a lot of valuable information in the field of herpetology, which is the study of reptiles and amphibians.”
READ FULL ARTICLE HERE
Posted by James Sarles at 8:16 AM